I am excited to announce that “Coltrane in Japan,” which From Scratch Performance Company is presenting at Theater for the New City, features new music I have composed. Claire Bachner and I have contributed incidental music for the play. “Coltrane in Japan” is written and directed by (From Scratch Performance Company’s Artistic Director) Robert Liebowitz.

More information can be found here.

I am excited to announce that The Non-Essentials, which From Scratch Performance Company is presenting at Theater for the New City, will feature new piano music I have composed. I have written incidental music for The Old Normal, a play by Robert Liebowitz (From Scratch Performance Company’s Artistic Director) that constitutes the second half of The Non-Essentials. I could not be more grateful to have been a part of this project! Many thanks to pianist Nishan Aghababian, who recorded the music; and to Tim Horace for his help in editing the recordings.

From the press release:

The Non-Essentials will consist of a solo dance presentation, The Five Stages of Grief; and a one-act play, The Old Normal. Both works consider the effect of the pandemic on life in New York City.

Albena Kervanbashieva is the choreographer and performer of The Five Stages of Grief. Music is by Tim Horace and Stephen Cornine.

In the July 22, 2020 Town Topics: “Comedy Co-Written by Princeton Playwright Gets Online Premiere; A Family Dinner is Marred by Snarky Political Debate in ‘Grudges.'”

I interviewed playwright and Knowledge Workings Theater  co-founder T.J. Elliott about his work with Joe Queenan. “Grudges” will be presented online through July 24.

In the May 6, 2020 issue of Town Topics, I reviewed the moving, virtual gala presented by McCarter on May 2. The event served as a retrospective of Ms. Mann’s thirty-year tenure.

In the April 29, 2020 issue of Town Topics: I had the honor of interviewing Princeton University professor Stacy Wolf, author of a new book, “Beyond Broadway: The Pleasure and Promise of Musical Theatre Across America” (Oxford University Press). Kelsey Theatre is the focus of the fourth chapter, “Community Theatre.”

Thank you to Natasha Dawsen of Words4Music for a kind post, in connection with From Scratch Performance Company’s upcoming inaugural gala! “Starting From Scratch: An Inaugural Gala for a new Performance Company” will be on Saturday, September 14, 2019 at City Center (130 West 56th Street between 6th & 7th Ave), New York City). 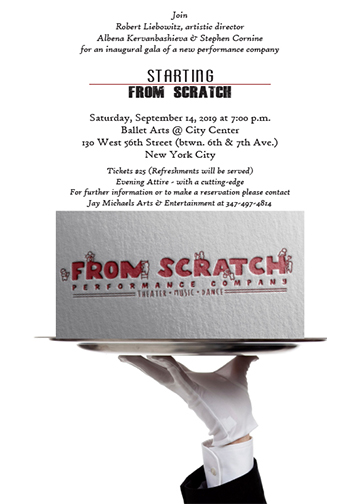 From Scratch Performance Company exists “because the members of it wish to bring awe-inspiring, jaw-dropping, thought-provoking works of art to the live entertainment-going public,” and “to tackle the ‘three-headed monster’—the gods of Theater, Music, and Dance—all under the same roof.”

“Starting From Scratch: An Inaugural Gala for a new Performance Company” will be on Saturday, September 14, 2019 at City Center. (130 West 56th Street between 6th & 7th Ave), New York City.)

The doors open at 7:00 p.m. and the performance begins at 8:00. Tickets are $25 and available on BrownPaperTickets. Refreshments will be served.

I am grateful to be represented by three works: “Queen of the May,” an ensemble number from my musical Robin Hood: How Legends are Made; and two concert numbers: “Merry Christmas,” and “Trinity.” It is especially satisfying to be able to share works that represent two of my compositional interests—musical theatre and concert pieces—with City Center audiences.

Check out the Broadwayworld.com article about the gala!

“Inspired Steps: Montclair’s Buzz Aldrin and the Apollo 11 Mission” was published in the Summer 2019 issue of Urban Agenda Magazine. In honor of the fiftieth anniversary of the moon landing, I interviewed William Murray, the planetarium technician for the New Jersey State Museum, which is presenting a commemorative exhibit, “Many Inspired Steps,” through November 10. I also talked to Jacob Brandt, the composer and lyricist of a song cycle, 1969: The Second Man; and educators from Buzz Aldrin Middle School in Montclair.

“‘Beautiful and Inspiring:’ A Ten-Year Renovation Transforms Princeton’s Firestone Library” was the cover story of the May 2019 (Reunions) issue of Princeton Magazine. I look at the library’s history, as well as the renovation. I also explored the two areas that are open to the public: the Milberg Gallery; and Cotsen Children’s Library.

“We Remember Alan Jay Lerner Well: The My Fair Lady Lyricist’s Centennial” was published in the Holiday 2018 issue of Urban Agenda Magazine. I interviewed Amy Asch and Dominic McHugh, the editors of The Complete Lyrics of Alan Jay Lerner (Oxford University Press, 2018). I also interviewed several producers and performers about Lerner’s work and legacy.